Yeah!! After a year of hard work and hours in the recording studio, I am really excited to be able to tell you that my self-titled debut album is going to be released next Friday 14 April.

I’m going to be sharing some sneak previews over the next week on my facebook page, so be sure to head across there to check them out.

Of course, now that the album is finished I’m turning my head to other projects and currently (as a break from originals) I’m working with Mike Raine (my Producer) on a series of covers, which I’ll be releasing in the near future.

The latest one we finished is ‘Human Behaviour’ by Bjork and are really, really happy with it – definitely very different from the original!  It definitely calls for a music video and we’ve got lots of ideas bouncing around our heads for that.

On Monday we recorded some vocals for “Crush” by Garbage – it went well, but I’m not entirely sure I’ve nailed it yet. It’s so low in my register that it makes it hard for me to get the right feeling into it. We could, of course, raise the key, but we’re reluctant to do that at this stage as the production really sounds great in a low key. Anyway, I’ll keep you posted on that one.

Apart from music, if I had to sum up this last week, it would be one surrounded by boxes and clutter and aching backs as we’ve slowly moved across from our old boat (Pied Piper) to our new boat (Dream Catcher).

I’ve posted a couple of videos on Youtube, the first giving a tour of Pied Piper, and the second sharing the arrival of Dream Catcher, so just click on the links which will take you to my Youtube channel if you’d like to see them.

As we’ve pulled things off Pied Piper they seem to have expanded – you’d be amazed how much stuff you can fit on a small boat – and it’s been a bit like a jigsaw puzzle working out where to put everything. We’re still surrounded by boxes, but every day I can see a bit more of the floor space, so I know we’re winning.

Here’s a photo of the 2 boats rafted up to make the move across easier. 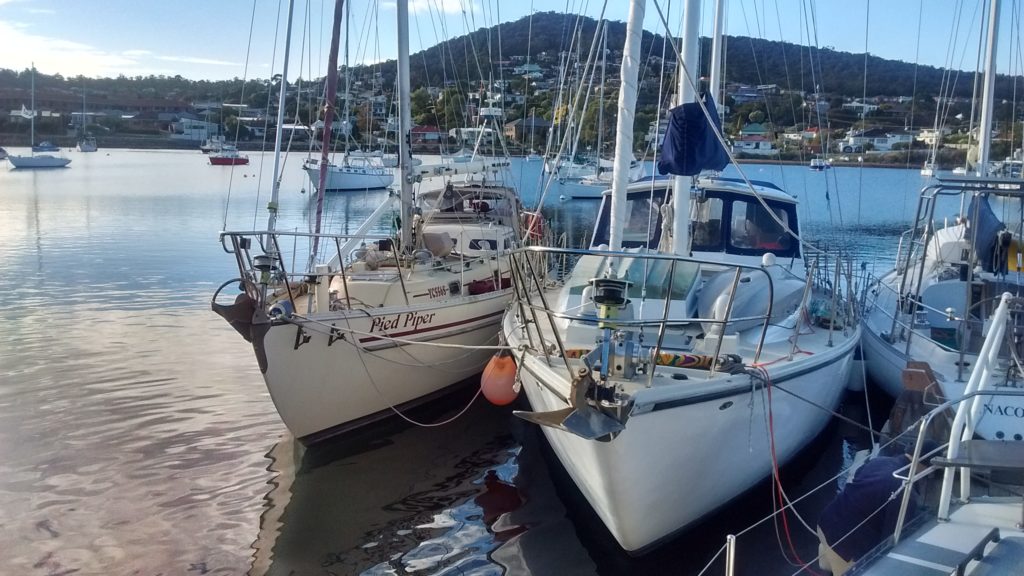 And, here’s a couple of photos taken a few days ago – Pied Piper on the left and Dream Catcher on the right –  Aaagh! 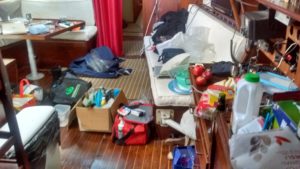 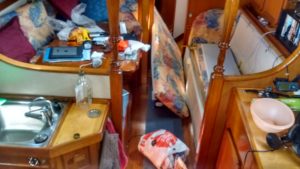 We’re just looking forward to the day when everything is stowed away and we can head out for a first sail! Of course, I’ll be sure to give you a video tour of Dream Catcher just as soon as I can be sure that it’s not going to include cardboard boxes LOL.