In my last post I promised I’d share some exciting news with you about my music.  Well…….big drum roll……..I’ve finished all the recording for my second album!!!!!!  Here’s a photo taken during our last recording session: 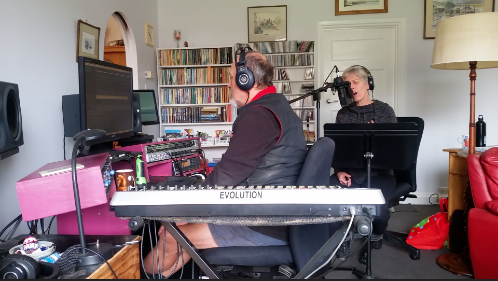 There’s still lots to do before I can release the album – deciding on the album title, choosing a first single release and shooting a Music Video to accompany it, album artwork etc. etc. but it feels as though a huge milestone has been reached.

To help me with the first 2 of these I’m going to hold a listening party in a couple of weeks in my facebook group – Laini’s Beach Shack (which is open to all my newsletter subscribers) and asking members to vote on their choice for a first single and to suggest an album title. If you’d like to be part of this process and get an earlybird listen to the album, then just sign head over to Laini’s Beach Shack and pop in your best e-mail address so that I can sign you up for my newsletters.  I’ll be sure to approve you asap.  Here is the link:

Over the past couple of weeks, as well as finishing the album tracks, I’ve been working on a new music video for ‘Wish’ – one of the last remaining tracks from my debut album which I haven’t yet got up on Youtube.

Sadly, it’s taking a lot longer than I thought it would.

No surprise really, as this is the first time I’ve attempted to video myself (without any outside help) against a green screen background.

My first attempt last week was OK, but the results were very disappointing because the focus wasn’t great.

I had another attempt a couple of days ago, this time using a proper video camera (rather than just the video function of my point and press camera) leant to me.  And, I put the green screen in a better location where it would have more light.

It’s such a long process though!

Phase 1:  Move all the furniture
Phase 2:  Put up green screen
Phase 3: Spray green screen with water and blow dry it to try to get all the wrinkles out (wrinkles cause shadows which don’t disappear when making the green transparent)
Phase 4:  Set up video camera
Phase 5:  Make up
Phase 6:  Shoot video clips with 3 changes of costume
Phase 7:  Review clips to make sure in focus etc.
Phase 8: Dismantle green screen and put furniture back in place

Here are some behind the scenes photos:

Now, onto editing!!!!!!  This could take a little while, but I’m looking forward to sharing it with you as soon as it is complete.

Until then, take care