I’m not going to write about my music in this post, but rather I want to get a bit closer to home today.

Some of you who have been receiving my newsletters or reading my blog posts for a while now will know that a year ago today my Husband, Peter, had a nasty Paragliding accident.  He flew feet-first at 50km/hour into a cliff, breaking his arm, a lumbar vertebrae and (most seriously) smashing both heel (calcaneus) bones into very small pieces.

He was lucky though – he very nearly ended up sliding off the cliff edge!

Anyway, I’m conscious that I’ve never really brought you up to date with his recovery progress, and perhaps now is a good time to do that.

Re-capping on that day is hard, but the memories are still very vivid – a doctor telling us on the evening that Peter lay in emergency, having had the results of all the X-rays and scans, that we should prepare ourselves for the fact that Peter may never walk again.  I feel a bit emotional just typing this..  Here’s a photo of Peter in hospital during the first week. 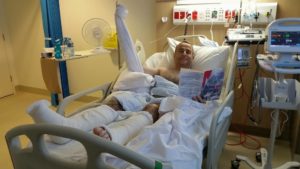 Anyway, the surgeons were absolutely brilliant.  They managed to piece together all the small pieces of heel bone and hold them together with wires, crews and plates (I hate to think what it will be like when we go through airport security!) and after 4 weeks in hospital Peter was ready to go home.

Home, however, was our boat.  With both legs and one arm in plaster that was going to be impossible!

With the threat from the hospital that Peter would have to go into Rural Rehabilitation unless I could find any accommodation, I had to find somewhere we could live pretty fast – not easy when the local rental housing market was at a premium!  I’d turn up for home viewings to find that 10 other couples were lined up to view too.  And, I had very specific needs – it had to be suitable to Peter in a wheelchair, and it had to be furnished – not much choice.

Looking back on it though, the heaven’s must have lined up, and it was in this time that I learnt the true generosity and selflessness of some people.

I discovered a cabin up in the hills which was perfect as a temporary solution.  Having told the owner I would take it if he was happy for me to sleep on the floor – there was only one bed – he, without my knowledge and within the space of 3 days, added an extra bedroom onto the cabin and put in a wheelchair ramp – wowsee!  Here is a photo of the cabin, plus one of Peter getting back into work 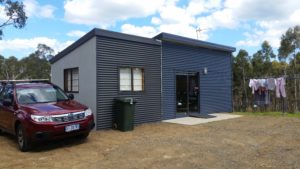 Anyway, since that time, Peter has made a slow recovery.  We always knew it was going to be a long journey, but in all that time he has remained positive and focussed.

A year on, we are still in the house but hoping to move back onto the boat in February.

Here is a photo of the 2 of us on the back verandah in the house. 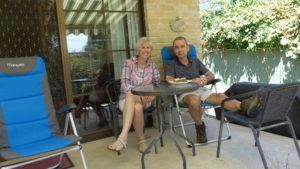 Peter can now walk without aids (unless he gets tired and uses ‘normal’ outdoor walking sticks.  He goes down to the beach every day for a walk on the sand (which the physio has told him is the best therapy).  He’s still slow, and a little ungainly, but hey, he’s walking (yah boo sucks you emergency doctor!) and he’s getting stronger and stronger.  He still can’t push up onto his toes, but I don’t think he’s far off, and that will be a huge breakthrough!  Every weekend we go swimming which is keeping up a level of fitness.  Plus we try to do Pilates a few times a week for muscle strength.

This is the biggest milestone for Peter though – 3 weeks ago, he had his first paragliding flight since the accident!!!!!  No, I’m never going to deter him from doing it – it’s his passion and I think that if he thought he couldn’t do it again, that would be very, very hard for him.

Here is Peter on his first take-off and flight. 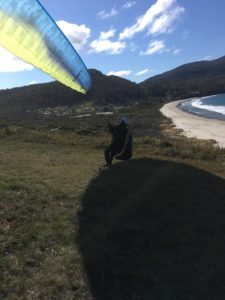 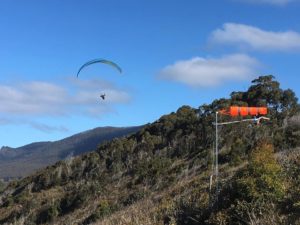 Yes, I’ve been worried – he’s out, as I type this, on his 3rd flight (the anniversary of his accident) but the happiness on his face and in his voice as he walks in through that door will make all the worry worthwhile – who wants to live with someone who’s unhappy!!

Anyway, I’m very conscious that in many ways, I’ve needed to write this to you – it’s been cathartic.  So, thank you for listening.

Until next time, when I’m really looking forward to giving you some exciting news about my music, take care.