The quick answer is some exciting news and shares on my upcoming second album “Take A Breath” ?

Firstly though, thank you everyone who wrote to me after my last post – I’m glad you found it interesting to read about the concept behind the music video for the first single release, also called “Take A Breath”.

It’s getting closer and closer now to the album release and I’ll soon be putting up a link for anyone who would like to pre-order the physical CD, so watch this space.

In this post however, I promised that I would share with you the full album artwork, created by my wonderful friend in Louisiana – Tammy Stewart.   One thing I absolutely love about modern times and technology is the way that is connects people from all over the world and allows collaborations which would never before have been possible.

I first met Tammy through Twitter and fell immediately in love with the way she created beautiful fantasy art out of her photography.  We got chatting and got to know each other and when I started thinking about the artwork for my second album, I approached to see if she would be interested.

Thankfully she was absolutely over the moon and for the next few weeks we collaborated – she asking me to send her photos in certain poses (many thanks to Mike Raine and Pamela Rosalynde for taking the photos!) which she then worked into the artwork and sent to me for consideration.

Here is the finished artwork which I absolutely love – I hope you do too! 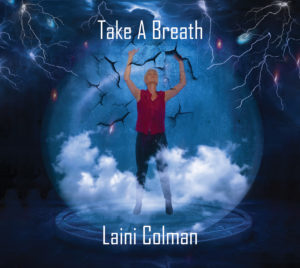 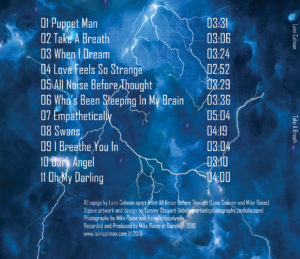 Before I release the album though, I am going to release one more single “I Breathe You In” as voted by members of my Beach Shack facebook group (which is open to all of my newsletter subscribers – just click on the link at the bottom of this newsletter if you would like to sign up and join in the fun) and this week I’ve been concentrating on starting work on the Music Video.

On Wednesday I woke up to a gorgeous late summer day and so, on the spur of the moment decided to take advantage of it to head down to Roches Beach, 20 minutes away, to shoot some video footage.

Thankfully the beach was virtually empty – just one couple walking their dog wondering who this mad woman was singing loudly to herself and prancing around on the beach ?. It was such fun though and a wonderful way to spend the afternoon. I always feel so happy at the beach!  Here is a photo:

I’m really looking forward now to being able to share the finished video with you – just lots and lots of editing first ?!

Finally, a bit of exciting news for me this week! Yesterday morning I woke up to discover that I’d been included in Episode 6 of the ‘Taking Off Podcast’ broadcast all the way from Peterborough in England!  Chris, the Producer, supports Indie music from all over the world and it feels such an honour to be included amongst so much musical talent!  Here is a link to the episode for all of you who are interested in listening – I appear with 2 tracks at  01.28.47

So, next time I write I’ll be able to announce the release date for my second single and also I’m hoping to be able to give you a sneak preview of the music video.

Until then, take care

PS – If you’d like to be the first to hear all my latest news, pre-release music, exclusive content and learn a bit more about me;  plus, receive some free downloads, then just pop in your best e-mail address here – Newsletter sign-up