I really hope the year is getting off to a great start for you.

Here in Tasmania, we are in mid summer, and what a summer we’re having so far – very hot, dry and windy, so much so that we have fires burning throughout the State – over 50 in total.  It’s worrying times.

We are safe where we are living at the moment (alhough it’s hard to escape the smoke pollution covering the State which at times makes it very uncomfortable to breathe outside).

Down in the Huon Valley though (where my friend and Producer, Mike Raine, lives – 30 mins away) they are having a terrible time of it, and quite a few communities have been evacuated.

Fire crews and fire fighting aircraft are trying to contain the blazes, but many are proving uncontrollable.  So, for the locals it’s a “wait and see and hold your breath” game.

Here is a map showing the current fires burning in the State – red symbols are emergencies where people have been evacuated, yellow symbols are to “to act/prepare”, blue symbols are to “keep watching and reading the advice” and the white symbols are fires not imposing any immediate danger. 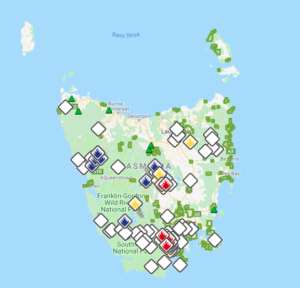 Life has to go on though, and since my last newsletter I’m really pleased to report that I’ve been getting stuck into the work that has to be done before I can release my new album.

Firstly, the music video for my first single release “Take A Breath”.

Over the Christmas period I started mapping out in my head the storyline for the video.  It was based on an idea Mike gave me, but much more complicated and when I presented it to him for his thoughts on whether or not it was achievable, he replied:

Oh, I LOVE Mike for his “can-do” attitude!

So, last week I spent 2 long days shooting all the green screen footage needed, whilst Mike started putting together the background animation.  There was a point when I was beginning to wonder whether I was being too ambitious!  What do you think?

However, it’s starting to come together nicely now, even though there are still quite a few tricky/fiddly sections to finish.  It’s going to be a fun, slightly surrealistic video and I’m feeling excited now to see the final version.

I addition to work on the Music Video I’ve been working with an artist on the album artwork and have been having a few photo shoot sessions for this.  It’s coming along nicely too, but once again takes time.

I’m starting to get very impatient to share all of this with you, but it will be few weeks yet, as once I’ve got all the material side of things sorted, I have to get all the music and artwork distributed, which can take about 4 weeks.  You will absolutely be the first to see and hear everything though,  before I release it to the Public.

Finally, I know you know I like to share some of my non-music life with you.  So, how could I leave today without sharing with you my latest Echidna Encounter ?.

PS don’t forget you can stream my first album here on my website, and there is also an option to purchase if you want your own copy:  Stream debut album ‘Laini Colman’

And, if you haven’t joined me in my facebook group and you would like to, then just pop in your best e-mail address after clinking on the join link on the page here: Laini’s Beach Shack Facebook Group